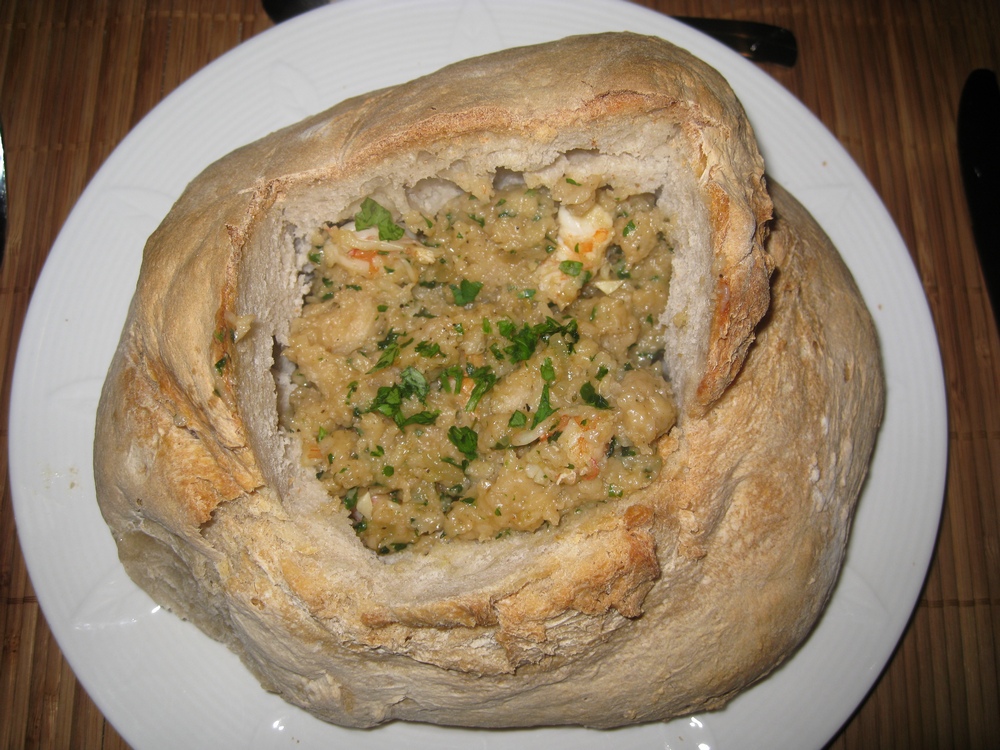 An acorda is a Portuguese bread-based stew with a consistency akin to a creamy risotto.

I first ate this at a lovely, if rather expensive, beach-front restaurant a Praia Verde – a beach in the East Algarve near the Spanish border which, uniquely for the area is backed by a forest of pine trees (hence the name “Green Beach.)

Unfortunately when we next had a craving for this dish, we made the journey to find that the restaurant was being redeveloped and therefore closed. The hankering was too strong to ignore so we decided to make it ourselves.

It was late in the day when I reached for my current favourite Portuguese cook-book, Piri Piri Starfish: Portugal Found

This meant there was nowhere where we could get all of the stated ingredients, so this is my own adaptation of the recipe, which worked very well, and I also copied the restaurant and used the hollowed out bread as a serving dish!

For people cooking this recipe outside of Portugal, a large French “boule” style bread would work, sourdough would be even better.

120g of the soft bread from the inside of the loaves, cut into chunks. 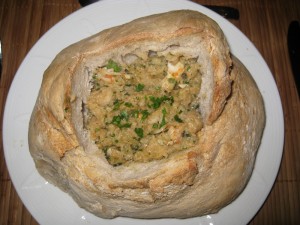 A small knob of butter.

A pinch of paprika.

First you make the stock. Wash, shell and devein the prawns, then put all of the prawn shells and heads in a pan. Add the whole garlic clove, half of the onion, bay leaf, celery, carrot and half of the parsley (unchopped and complete with stems.) Fry gently in the olive oil for 2-3 mins and then add 500ml of boiling water and a good grind of salt and pepper. Simmer gently for 15 mins and strain, so you end up with some good, fishy stock.

Here is where my recipe starts to deviate from the original as I had to use cooked prawns instead of raw. Cut each of the prawns into three chunks. Pour two tablespoons of oil into another pan, chop the other half of the onion and fry in the oil until golden. Meanwhile, chop the remaining parsley and add to the pan with the chopped garlic, paprika, and the chopped prawns. Fry very quickly so the prawns do not dry out and the garlic does not burn. Remove the prawn mixture from the pan and set it aside.

Add the wine to the same pan and wait for it to bubble, gradually add the chunks of bread to the pan so it crisps ever so slightly, then add the stock, mashing the bread into the mixture as you go. The mixture will start to resemble a thick risotto. When it does, add the prawns, some more salt and pepper to taste, the lemon juice and the butter. Stir well so the butter melts into the mixture.

Scoop out the mixture and serve it in the bread, with a little extra parsley scattered on the top.