It probably seems strange that one of the things I most looked forward to trying in Portugal was cabbage soup, but the description in the “Food of Spain and Portugal” by Elisabeth Luard was so vivid and appetising it was right at the top of my list.

To make the Caldo Verde you just need 4 floury potatoes (in the UK I would imagine King Edwards would be perfect,) 1 finely chopped onion, salt, pepper, good extra virgin olive oil and a pound (454g) of suitable cabbage. In Portugal they use galegas, which comes from Galicia in Northern Spain, but Kale or Spring Greens would work just as well.

The key thing about the cabbage is that it must be shredded as finely as possible (think Chinese Crispy Seaweed – more of that later.) Luckily, here in Portugal, you can buy handy packets of ready shredded cabbage for this purpose.

Peel and cut the potatoes into chunks, and chop the onion into quite fine (we went for rustic) chunks. Put them in a big soup pot and add seasoning and boil in 2 litres of spring water. After about 20 minutes, the potatoes should be tender – mash them into the broth and check again for seasoning, then add a couple of tablespoons of olive oil.

Bring the broth back to the boil and sprinkle in the cabbage, keeping the heat strong. Bubble for 3 minutes until the cabbage is a bit softer but still retaining some crunch.

Serve, as we did, with a bit more olive oil, and some piri piri. As recommended in the book, we had this served simply, with heavy local bread and young Vinho Verde. Along with the bread it made a very filling and comforting meal. This soup will replace the Heinz Tomato I always had in times of illness back in the UK! 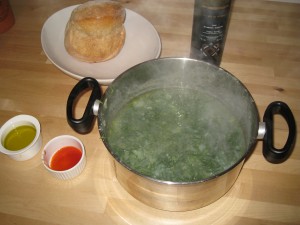 I mentioned crispy seaweed earlier in the post. Having been left with a little of the cabbage, I figured I would attempt some Chinese style crispy seaweed, as I had heard some time ago that it used some kind of cabbage rather than actual seaweed. I heated an almost dry frying pan, chucked some in with some seasoning until it looked right, then dried it on kitchen paper. Hey presto, I had, well, almost crispy seaweed. It was perfect in terms of texture but didn’t taste quite right. I turned to the web for inspiration and apparently the bit I missed was a fair amount of sugar, and, in several recipes, some crushed pine nuts. I shall be having a second attempt next time I make caldo verde and will report my findings!

Click below to find the book which inspired this recipe on Amazon UK:

Food of Spain and Portugal: A Regional Celebration