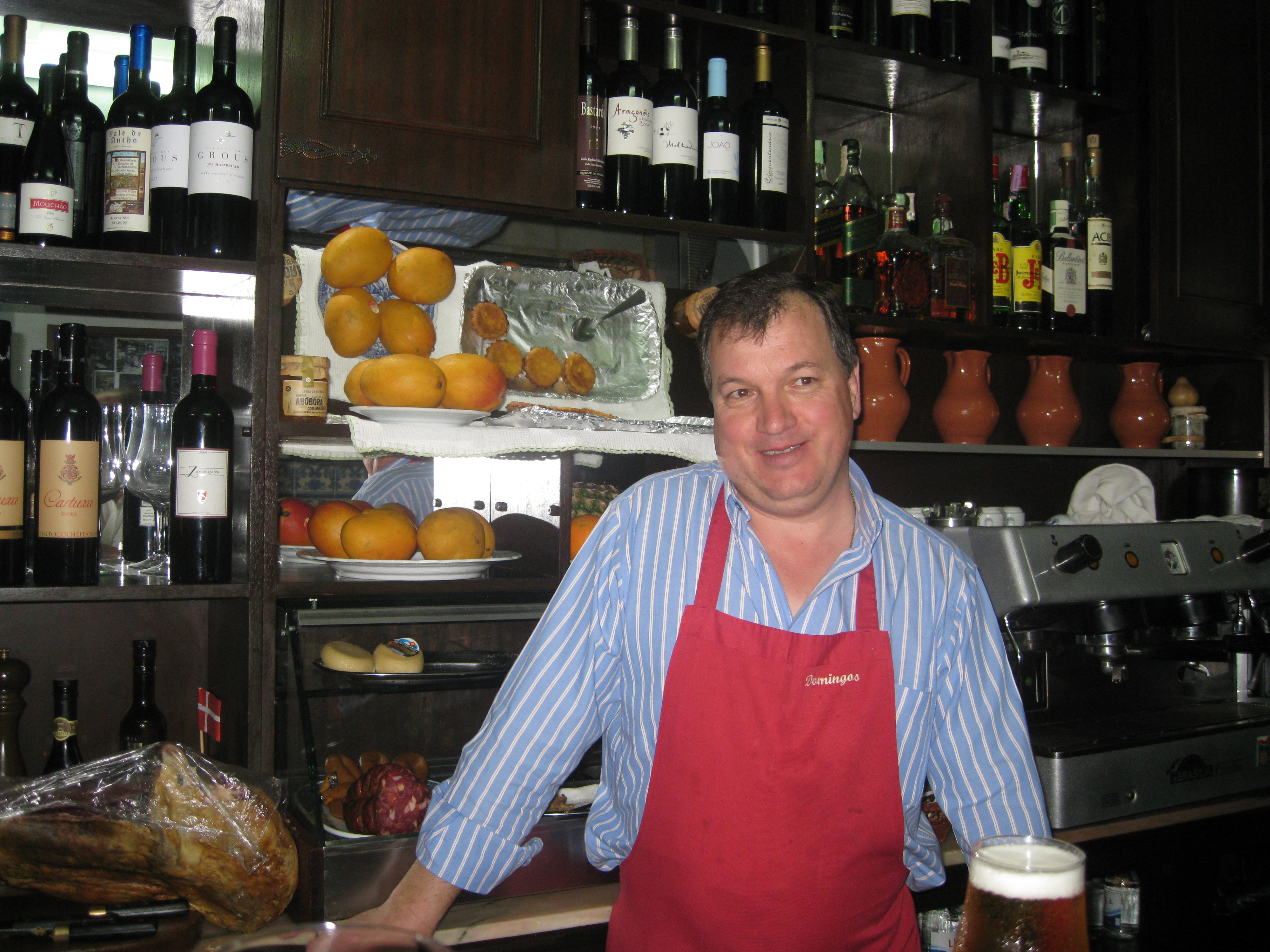 This place is rather special. Tucked away on a quiet street, we would never have accidentally found this place were it not for the recommendations both from our guide books and people at our hotel in Evora.

Although there are a few full main courses on the menu, pesticos (Portuguese for tapas) is the order of the day here. The place looks like a bar with just eight or nine stools for those lucky enough to fit in and eat here.

Domingos (as seen in the picture) runs this place on his own – serving the drinks, topping up the wine, cooking the tapas and exchanging friendly banter with the customers. After choosing our wine from a huge selection of dusty bottles, all helpfully listed by region in the menu, we commenced our feast.

The usual bits first: meaty chorizo, some of the tastiest presunto I have had in a while, sliced wafer thin just as it should be, and delicious marinated peppers, cut into fine ribbons.

So far, so good. Then it got really interesting – goats cheese baked until gooey , smothered over crusty bread. Juicy prawns in garlic, and mushrooms baked in a coronary-inducing quantity of butter.

We had to go back for more and spotted our neighbours at the bar eating some kind of lamb cutlets. After some entertaining banter caused by the fact my wife, when attempting in Portuguese to order “the same as that woman,” actually ended up saying “I would like to buy that woman,” we secured ourselves a large plate of these rich lamb cutlets.  We were very impressed that in addition to all of his other tasks, Domingos chopped the cutlets off a block to order, and then truly amazed that alongside the tomato and onion salad we were given with the lamb, we were presented with a bowl of potato crisps that he actually cut and deep fried from fresh.

Our final shared pestico was a dish of scrambled eggs with chopped asparagus – very rich and tasty but perhaps a little salty for my taste – that last comment the only thing I can think of to criticise the food at this wonderful little place, and not something my dining companions agreed with anyway!

As well as the food and hospitality, I should also mention the port – Mouchao – a wonderful smooth and tasty drop which was literally so good we bought the bottle. According to Domingos it isn’t port in the true sense of the word as it is made in the Alentejo – not a problem to us – if you see this about I recommend buying some! As if this wasn’t enough we were

presented at the end of the meal with a free shot of some silky smooth brandy.

You are probably getting the impression I rather liked this place. You would be right. When you live in Portugal you get truly spoiled when it comes to good food, and this was a stand-out meal amongst many stand-out meals. As I said at the start: “this place is rather special.”