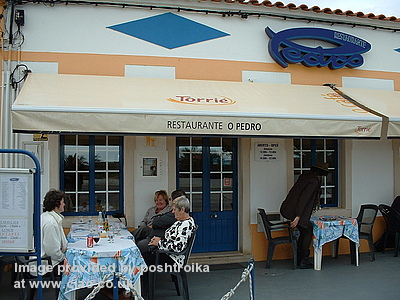 O Pedro is a quite a well-known restaurant with something of a local reputation. When I looked online for Cabanas restaurant reviews, existing reviews of the place were very mixed, so we were interested to know what we would find.

The location is good with outdoor tables overlooking the (nearly completed) new boardwalk and the Ria Formosa. Although we sat outside, I also had a good look at the interior which was a lot bigger than it looked from the outside and busy, mainly with locals who were more clued up than us as to the huge mosquito invasion that takes place at dusk (my legs still look like I have a rare disease.) 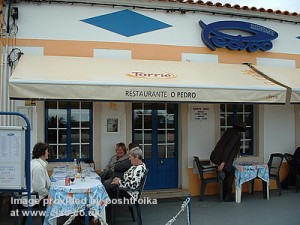 Service was faultless, and I should give a special mention to our lively waiter who, as well as being a huge hit with the few children eating outside, had a faultless command of Dutch, English, Portuguese and French. Although running off a probably much-repeated “routine,” he was a credit to the place.

Onto the food; the couvert was straightforward and a little uninspiring – standard Portuguese bread, average olives and the usual pack of sardine paste – it would have been nice to see something home-made, even just some marinated carrots, but at 90 cents per person this is not a major complaint.

Starters: my wife had tuna pate, served with crispbread. It was home-made and very tasty – a shame really that it wasn’t served as part of the couvert. I had an extremely tasty fish soup – a very good example with rich flavour and generous amounts of chunky fish.

Our main courses were decent Portuguese food served in typically huge portions. My wife had a good tender swordfish steak “Algarvia” – with tomatoes, onions etc. It was well cooked and seasoned and probably overshadowed my rather average squid. This had nothing wrong with it as such, but while certain parts of the squid packed in a lot of garlic flavour, the seasoning was very uneven – certain forkfuls tasted of nothing much at all. The squid didn’t commit the worst possible sin of being over-cooked and chewy, it just wasn’t very inspiring. Chips / salad / potato accompaniments were all very standard.

It was a shame that the quality of the fish soup, and the excellent desserts, wasn’t quite carried through the whole meal. However, it was all excellent value – all of the above, along with a bottle of white Monsaraz wine, water, coffees and two glasses of almond liquor (amendoa,) came to just under 40 euros, which is fantastic value by any standards.

Will we go back? We probably will, but it will likely be on a week-night because we don’t fancy cooking, and not for a special occasion. If we revise our opinion after our next visit, I will be sure to post it on the blog! 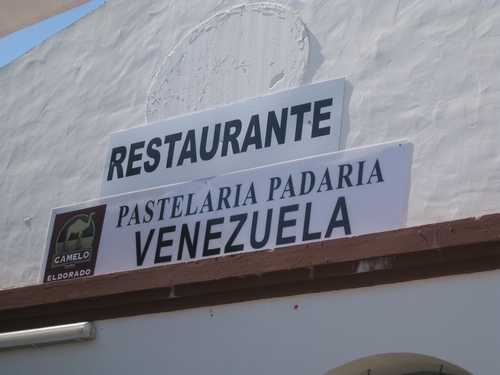